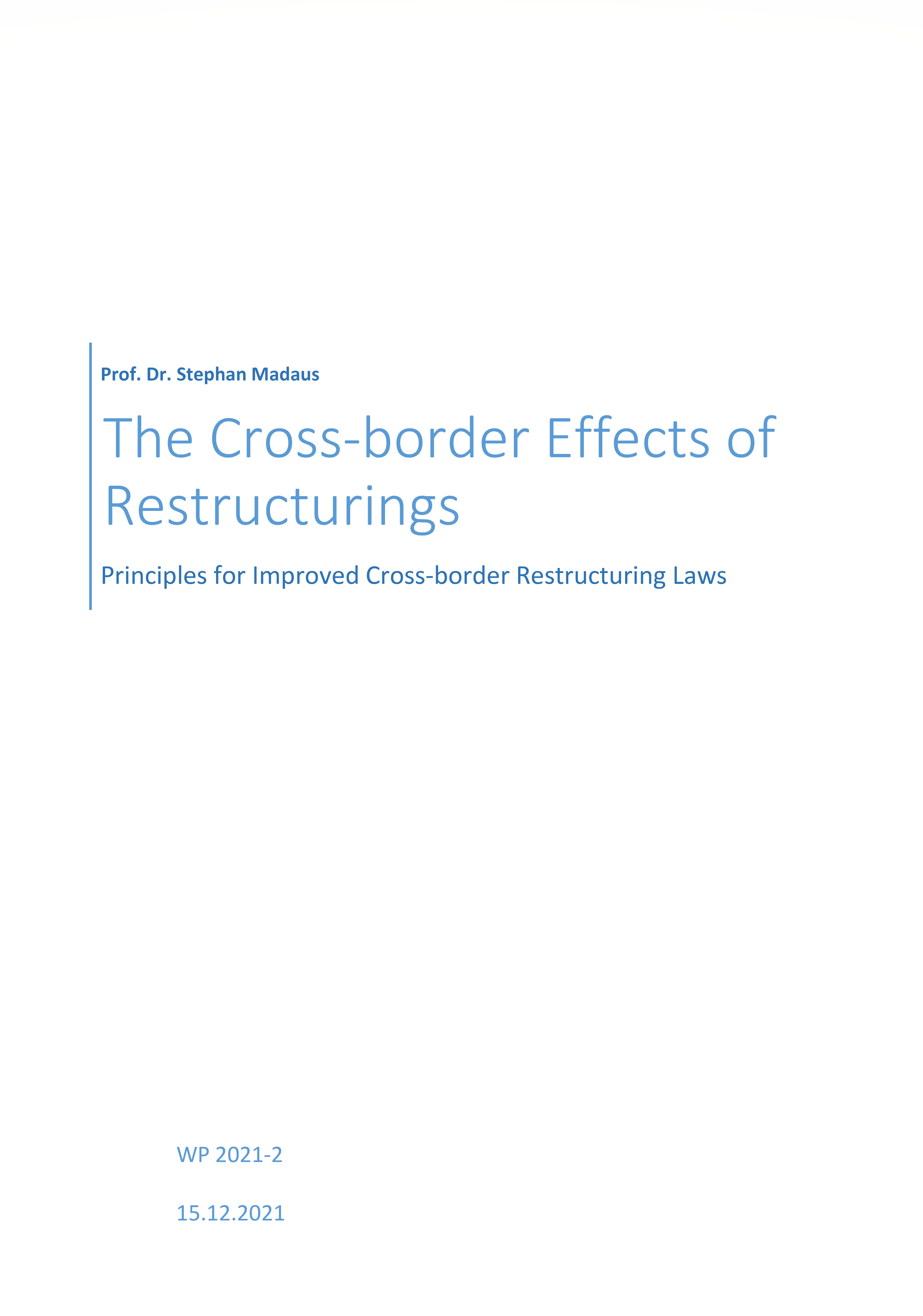 This week UNCITRAL Working Group V has started considering the thorny issue of applicable law in insolvency proceedings in its latest project. The deliberations use the recommendations 30–34 and accompanying commentary of the UNCITRAL Legislative Guide on Insolvency Law (the “Guide”) as the starting point and intend to focus first on lex fori concursus and exceptions thereto in the context of a simple scenario– an insolvency proceeding with respect to a single debtor – taking up any other issues of applicable law in insolvency proceedings. The baseline scenario already encompasses the question whether applicable law rules may raise distinct issues in the context of reorganization as opposed to liquidation. In my view, the answer to this question is YES based on the assessment published in my new Working Paper (download here).

The paper explains the phenomenon of a restructuring (or reorganization in US bankruptcy law terminology) and the mechanisms for cross-border effects. It analyses the role of the lex causae and continues to portray why this role has been sidelined in insolvency proceedings by the lex fori concursus. The analysis demonstrates that the asset-oriented rules and principles of cross-border insolvency law are not well aligned with the needs in debt-oriented restructuring procedures. The paper concludes by identifying principles for the development of a special cross-border restructuring framework based on the principles of Private International Law.

The key insights of the paper are summarizes as follows:

(1) The debtor’s COMI is not a solid criteria both for allocating debt-oriented restructuring proceedings and their recognition abroad.

(2) Debt-restructuring proceedings in the country closest connected to the law governing the restructured debt under PIL rules shall pincipally both be available there (in terms of international jurisdiction even without COMI) and recognised abroad.

(3) Debt-restructuring proceedings in a country with (only) a sufficient connection to the law governing the restructured debt under PIL rules may pincipally be made available there (policy choice in terms of international jurisdiction with or without COMI and extending the lex fori to substantive modification) but only recognised in countries with closer connections under a substantive protection test.

(4) Debt-restructuring proceedings in the country not connected to the law governing the restructured debt under PIL rules shall pincipally not be made available (in terms of international jurisdiction without COMI) and cannot expect to be effective abroad.

These insights may provide orientation in a world where modern legislation shows the tendency to extend the tools available in restructuring and insolvency proceedings to affect substantive rights. Plans and discharges may discharge or amend creditor rights against third parties in or even without a group context. Executive contracts may be terminated not only in case of the administration of a bankruptcy estate but also if petitioned by the debtor in some (Dutch) restructuring proceedings.