On 20 May 2020, the Government in London presented the Corporate Insolvency and Governance Bill to Parliament where it passed through the House of Commons in one day on 3 June 2020 (for updates see the tracker). [Update: The Bill received Royal Assent on 25 June 2020 and entered into force on 26 June 2020.]

This new bill will introduce a stand-alone moratorium for up to 20 business days for troubled companies (which can be extended for further 20 business days) and new rules on ipso-facto-clauses to the Insolvency Act 1986. More importantly, it will introduce an new type of a scheme of arrangement to the Companies Act 2006: „Arrangements and Reconstructions for Companies in Financial Difficulty“ – or in short: a reconstruction plan.

The new plan procedure would follow the procedural steps of a common scheme of arrangment (first hearing, class meetings, confirmation hearing). It could be accompanied by the new moratorium if necessary. The key feature of the new plan process is that it will allow a company to bind all creditors, whether senior or junior, even if they vote against the plan, through the use of the  “cross-class cram down” provision. In contrast, the scheme of arrangement only allows to bind a dissenting class of shareholders if they have „no economic interest“ in the company; dissenting creditor classes can veto a scheme.

For companies in financial difficulties

While a scheme of arrangement is available to all companies regardless of their financial status (solvent and insolvent schemes), the new plan would need to explain that the company has encountered or is at least likely to have encountered financial difficulties that are affecting, or will or may affect, its ability to carry on business as a going concern. This rather soft threshold of financial difficulties would probably be met by most companies that use solvent schemes today.

A cram-down rule with no (absolute) priority rule

With respect to the ongoing discussion in EU Member States about the best implementation of a cram-down rule, the statement of the UK government and restructuring practice is clear (and no surprise).  A dissenting class is bound if the best interest test is observed and one „in-the -money“ class supports the plan. The court does not test whether the distribution of the restructuring surplus follows the waterfall of a liquidation in or outside bankruptcy proceedings. English law does not implement any (relative or absolute) priority rule for the sanctioning of the new reconstruction plan. This comes as no surprise as no such rules have existed for schemes of arrangements when shareholder classes were crammed down. Both the Englisch restructuring practice and finance industry have flourished without them.

Takeaways for Europe (and Germany)

For the overall EU discussion about APR/RPR and the implementation of art. 11 of the Directive, the UK approach demonstrates two key insights.

First, there is obviously no need for an absolute priority rule in order to save the world of credit, company or even private law as we know it. Fearmongering of such kind against the implementation of any kind of a relative priority rule (see de Weijs at al. or Brinkmann) neatly overlooks the fact that the UK (as most other European jurisdiction) has been fine without any such rules. Even more, London has established itself as a restructuring hub with schemes of arrangements being routinely recognised elsewhere, even in the US.

Second, the combination of actual consent and a best interest test (or no creditor worse off test) provides a solid basis for a cramdown rule, provided that the latter does not simply compare the plan distribution with the low payoff in a bankruptcy liquidation. I made this point earlier already (see most prominently here). I doubt, however, that actual consent is sufficiently demonstrated if only one class of in-the-money creditors supports the plan. Such a low threshold leaves a lot of room for coercive plans that can only be trusted to parties in a jurisdiction where practitioners and judges are capable and willing to recognise possible misuse. Most jurisdictions would be well-advised to require a higher level of actual consent before allowing a plan to be confirmed against the veto of a class.

The relevant cram-down provision in Part 26A of the Companies Act 2006 would read as follows:

The final version of the Directive (EU) 2019/1023 on Restructuring and Insolvency provides for a new rule to assess the fairness of the distribution of value under a plan if an affected class of creditors voted against the plan: the Relative Priority Rule (RPR). It is provided in art. 11 (1) (c) stating that one of the conditions to confirm a plan over the veto of a class is that the plan

‘ensures that dissenting voting classes of affected creditors are treated at least as favourably as any other class of the same rank and more favourably than any junior class’.

As an alternative to the RPR, art. 11 (2) allows Member States to implement an Absolute Priority Rule (APR) stating that the plan must ensure

‘the claims of affected creditors in a dissenting voting class are satisfied in full by the same or equivalent means where a more junior class is to receive any payment or keep any interest under the restructuring plan.’

While the APR represents a concept that has been a part of US law for 80 years and German law for 20 years, the idea of an RPR is not just new. It has also not yet been explained extensively by scholars. If Member States consider implementing such a concept, they would probably like to know how it works and what it needs to work best.

The following quick guide aims at providing this assistance: 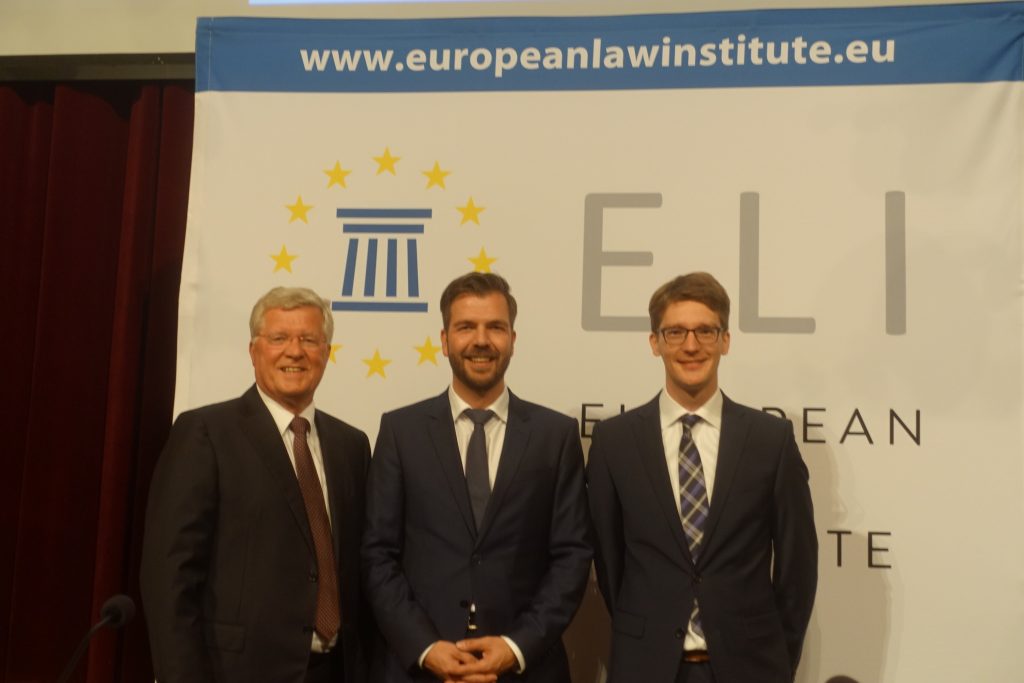 Bob and I (left and center on the photo, with project assistant Gert-Jan Boon) are pleased to report that last week, during the General Assembly and Annual Conference of the European Law Institute (ELI) in Vienna, our report ‘Rescue of Business in Insolvency Law’ was approved as an official ELI Instrument.

The Report consists of 115 recommendations explained on more than 375 pages. Its ten chapters contain recommendations on a variety of themes affected by the rescue of financially distressed businesses: (1) Actors and procedural design, (2) Financing a rescue, (3) Executory contracts, (4) Ranking of creditor claims; governance role of creditors, (5) Labour, benefit and pension issues, (6) Avoidance transactions in out-of-court workouts and pre-insolvency procedures and possible safe harbours, (7) Sales on a going-concern basis, (8) Rescue plan issues: procedure and structure; distributional issues, (9) Corporate group issues, and (10) Special arrangements for small and medium-sized enterprises (SMEs) including natural persons (but not consumers). The Report also includes a glossary of terms and expressions commonly used in restructuring and insolvency matters.

We as Reporters feel that the Report is timely and may have a significant and positive impact on the harmonisation efforts of the European Commission as laid down in the November 2016 Proposal for a Directive on preventive restructuring frameworks. The topics addressed in the Report are intended to present a tool for better regulation in the EU, developed in the spirit of providing a coherent, dynamic, flexible and responsive European legislative framework for business rescue. Mindful of the European Commission’s commitment to better legal drafting, the Report’s proposals are formulated as comprehensibly, clearly, and as consistently as possible. Still, the recommendations are not designed to be overly prescriptive of specific outcomes, given the need for commercial flexibility and in recognition of the fact that parties will bargain in the ‘shadow of insolvency law’. The Report is addressed to the European Union, Member States of the EU, insolvency practitioners and judges, as well as scholars. The targeted group many times flows explicitly from the text of a recommendation or the context in which such a recommendation is developed and presented.

We cherish the belief that the report will assist in taking a next, decisive step in the evolutionary process of the European side of business rescue and insolvency law.

The suggested citation is either: